As Technology Director , Vidya Laxman spearheads Tesco’s constant endeavour to stay ahead of the retail technology solutions curve. She has recently relocated to UK taking up her 5th new role as Channels Director leading and supporting the Tesco Tills globally across all stores and also in the development of omnichannel retail platform. Previously she was also on the Tesco Bengaluru board and the Tesco Bengaluru CSR board. A Masters in Computer Science from Boston University set her on the path to becoming COO of Thoughtworks, before joining Tesco in 2014. A core committee member of industry bodies, Vidya is as passionate about diversity and inclusivity as she is about tech and was an integral part of Grace Hopper (Anita Borg Institute). When she isn’t leading high performing, cross-functional, culturally diverse teams spread over 3 continents, Vidya is a hard lady to catch as she’s busy chasing her next PB (personal best timing). An avid marathoner, she’s run the New York and Berlin marathons among several others. 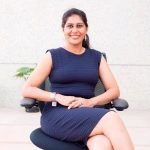